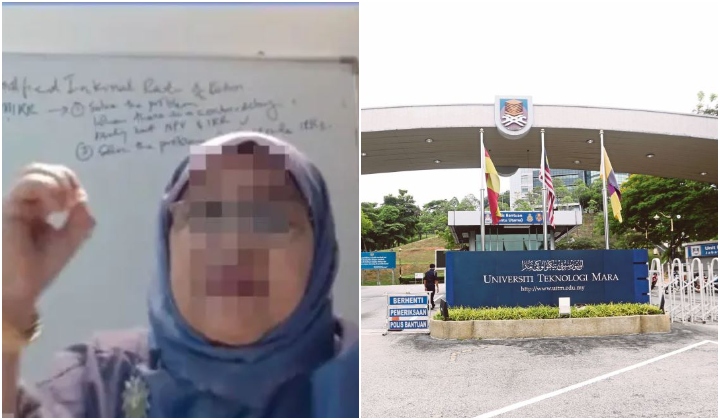 By now, you’ve probably read on social media or seen the news about a lecturer from Universiti Teknologi Mara (UiTM) who made an insensitive comment toward one of her students during an online class. The video went viral on Twitter late Tuesday (March 29) night and was viewed over 900,000 times and shared by more than 50,000 Twitter users before being taken down.

A video of a female lecturer berating a student who was using his phone to attend an online class in his fifth semester went viral recently.

When she found out his father was unemployed and his mother is “no more”, she told him to ask his sister to sell her gold bangle so he can afford a laptop.

She said that without a laptop, the student could not study well and would end up a dropout.

“The price of a laptop is only RM800. What is your problem? That’s why I can’t sit with B40 people. They’re thinking more of other matters than their lessons,” she said before proceeding to tell him to turn off the camera as she did not want to see his face anymore. –The Star

UiTM issues an official statement regarding the lecturer

UiTM did not wait too long to issue a statement on the matter. Vice-Chancellor, Prof Datuk Dr Roziah Mohd Janor said that UiTM is concerned with its students’ welfare and will do everything to ensure they have the most conducive environment to study.

“Following the viral sharing of video on social media involving the actions of a UiTM lecturer who had issued sensitive comments, the university has studied the issue and taken swift and appropriate action against the lecturer,” she said in the statement”.

“UiTM was formed to help the underserved continue their studies at the university level”.

“UiTM understands the constraints, difficulties, and situations faced by students in the online learning and teaching process,” she said.

In another interview, Dr Roziah explained that there might be an ulterior motive for the video to be spread.

“I was told that the incident actually happened during last semester, and not recently. So, there must be a reason as to why the video was only released yesterday”, she told the reporters.

In Cik Min’s opinion, I believe there was a reason the video was only released recently not to humiliate or degrade the learning institution, but to protect the student in the video.

Had the video been released last semester, he might be suspended from graduating or barred from sitting for examinations.

Netizens’ reaction toward the whole incident

It can be said that almost everyone on the Internet was leaning heavily toward the students compared to the UiTM lecturer. They think that there was no need for her to be insensitive and borderline rude toward her students, especially since the student in the scenario can barely support himself, let alone purchase a laptop.

Nevertheless, some people actually believe that the lecturer scolded and berated the student out of ‘tough love’.

In Cik Min’s opinion, tough love is almost the same as toxic positivity where it involves dismissing negative emotions and responding to distress with false reassurances.

While tough love may appear to be effective in the short term, it can actually worsen the condition and lead to dangerous relapses later on.

Though the lecturer may have offended many people, that gives them no right to publicly spread the UiTM lecturer’s private information such as phone number, address, etc.